The Bark is the outer crust that forms when smoking meat.  It is usually associated with pulled pork or brisket. 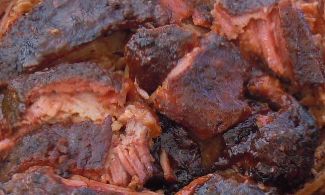 The Bark  is the most flavorful layer on the outer surface of the meat that is formed from the sugars in the rub caramelizing.

Other enhancers to forming a good crust come from spraying or misting a liquid containing sugar like apple juice onto the meat periodically during the cook.

Your choice of a glue can also affect the formation of the bark, such as CYM, molasses, honey, etc.